The Raspberry Pi Zero launched just 6 months ago, in November 2015, and today it receives an update that adds a CSI camera connector allowing you to use the (recently updated) Raspberry Pi cameras with your Pi Zero. 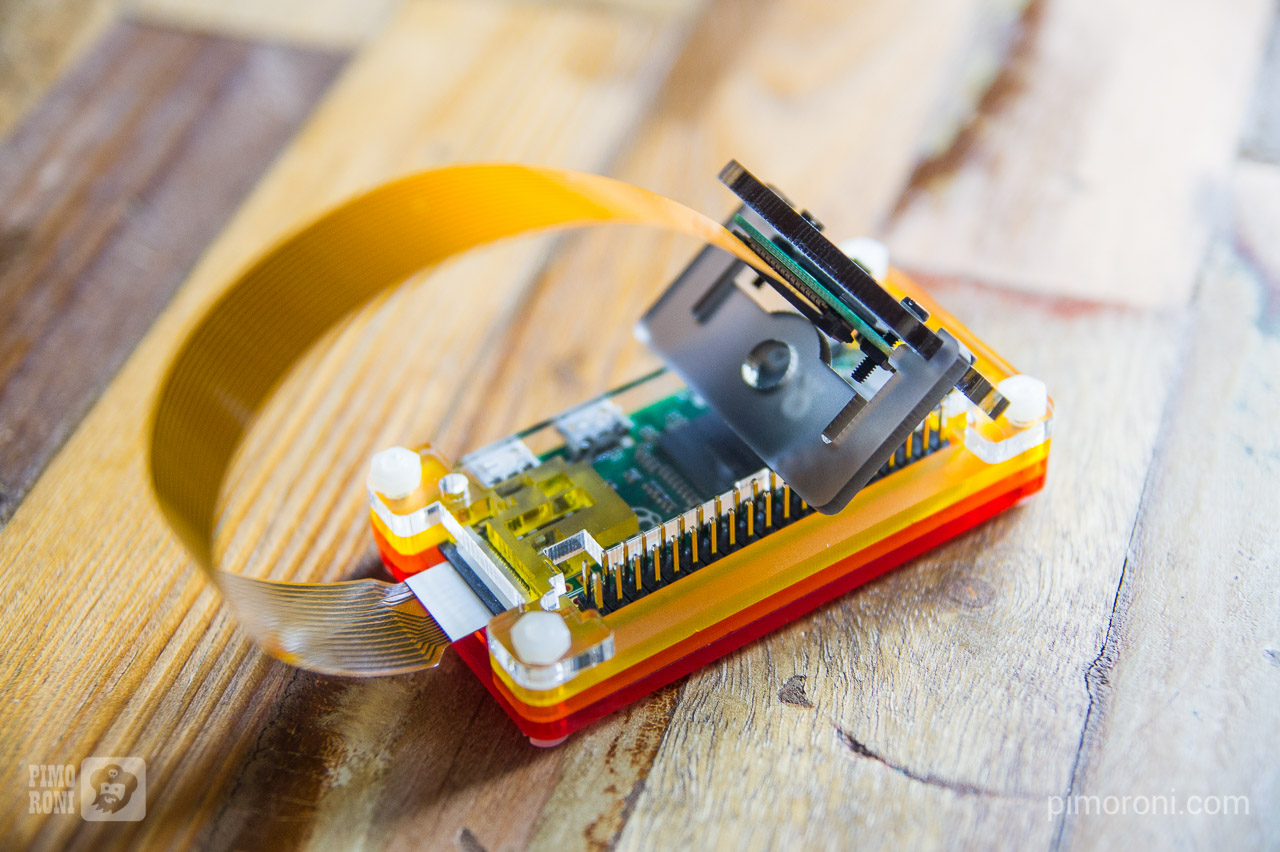 The specs, with the exception of the camera connector, remain the same as the launch version of the Zero, as does the price. The new Zero keeps the same Broadcom BCM2835 with 1GHz ARM11 core and 512MB of LPDDR2 SDRAM.

A few of the surface mount components move across slightly, on the right hand edge of the Zero, to accommodate the new connector, as does the activity LED which is also rotated 90 degrees. 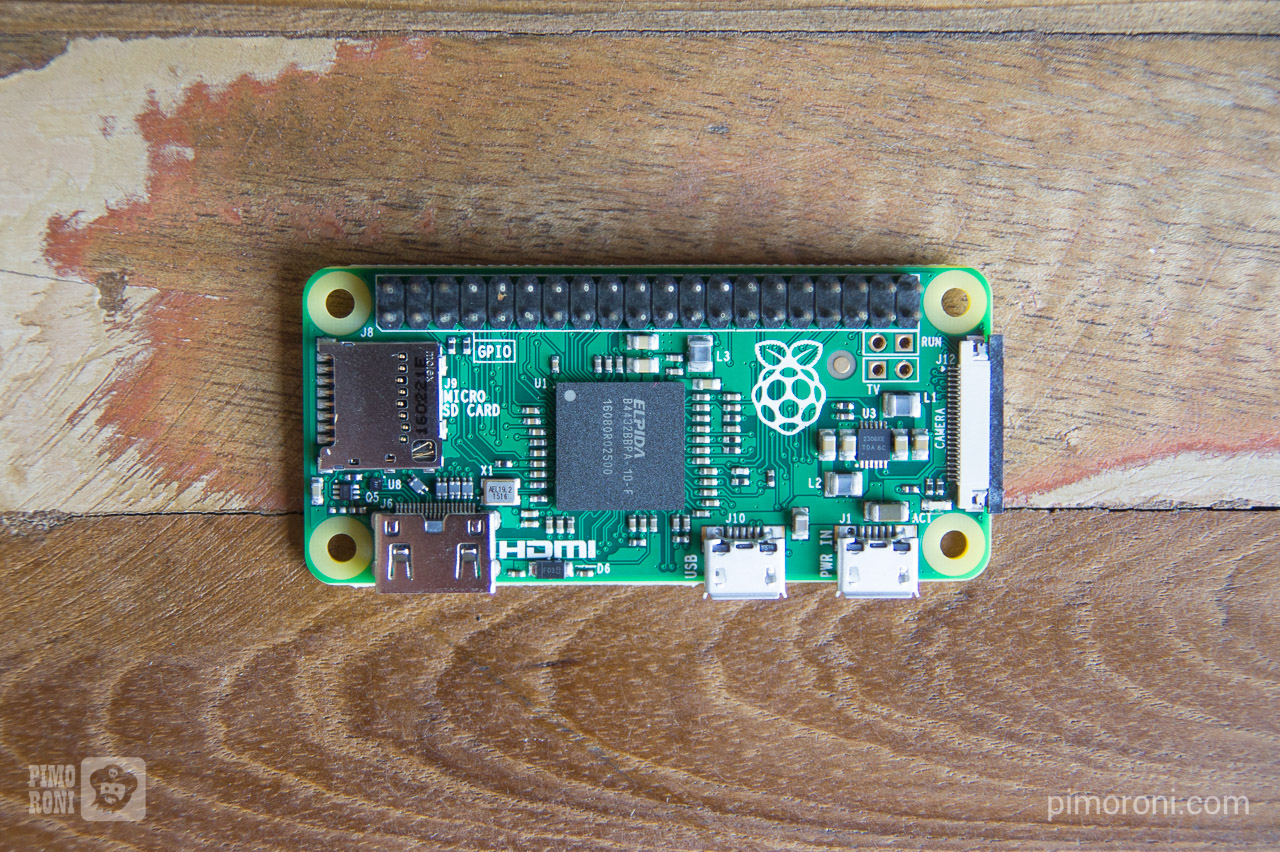 A couple of the copper contact points on the bottom of the Zero have disappeared - PP3 and PP4 - and PP8 and PP9 have moved elsewhere. PP3 and PP4 are just ground pads, so this change shouldn't have much impact, although some add-on boards that use pogo pins to connect to these pads may be affected.

The diff images below let you see the differences (in red) between the new Zero and the first version. 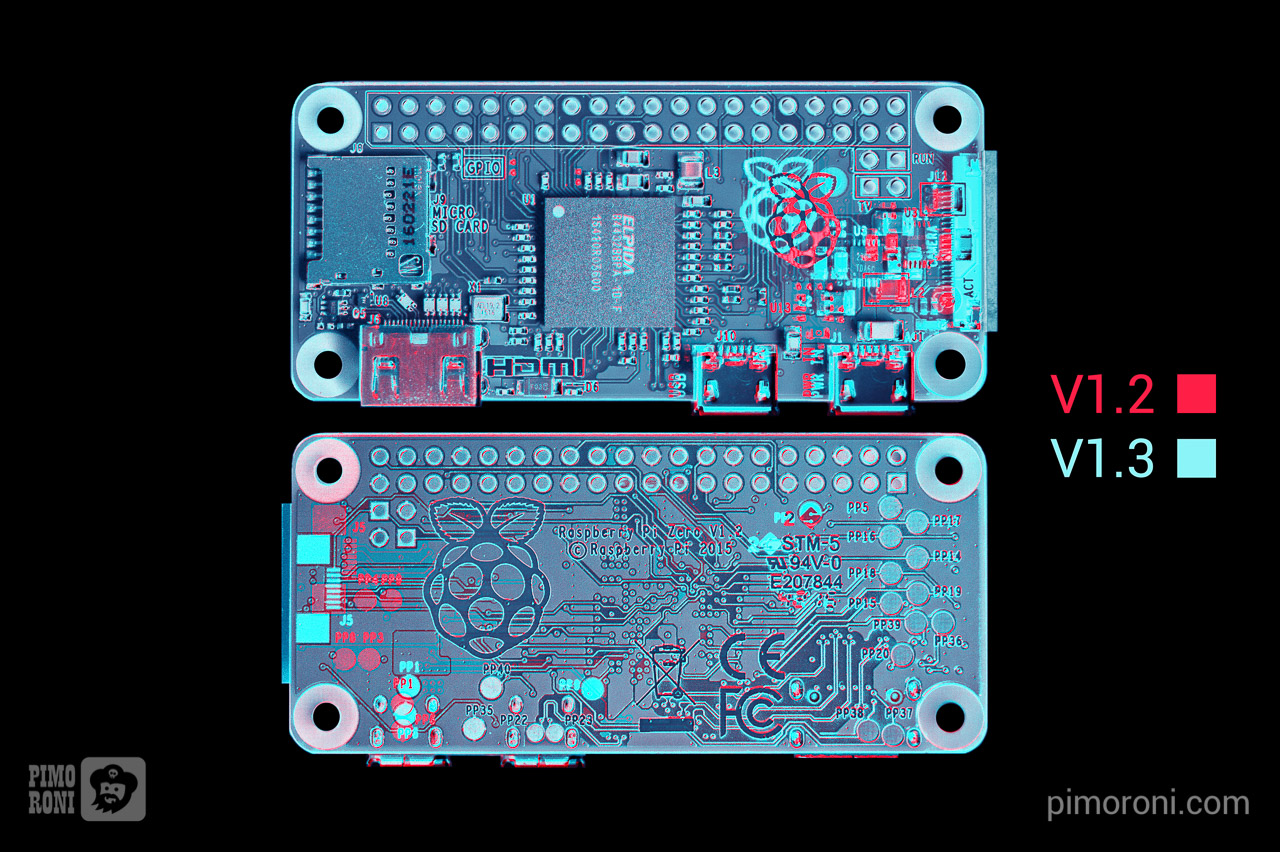 The most notable feature of the new camera connector is its size. It's smaller than the CSI connector on the Pi 3 - ~11.5mm compared to 16mm for the Pi 3 adapter.

This means that there is a new camera cable that converts between the larger and smaller CSI connectors, to allow you to use the existing Raspberry Pi cameras with your new Zero.

Be aware that the clips on the connector are not quite as sturdy as those on the larger Pis, so take care not to damage them. 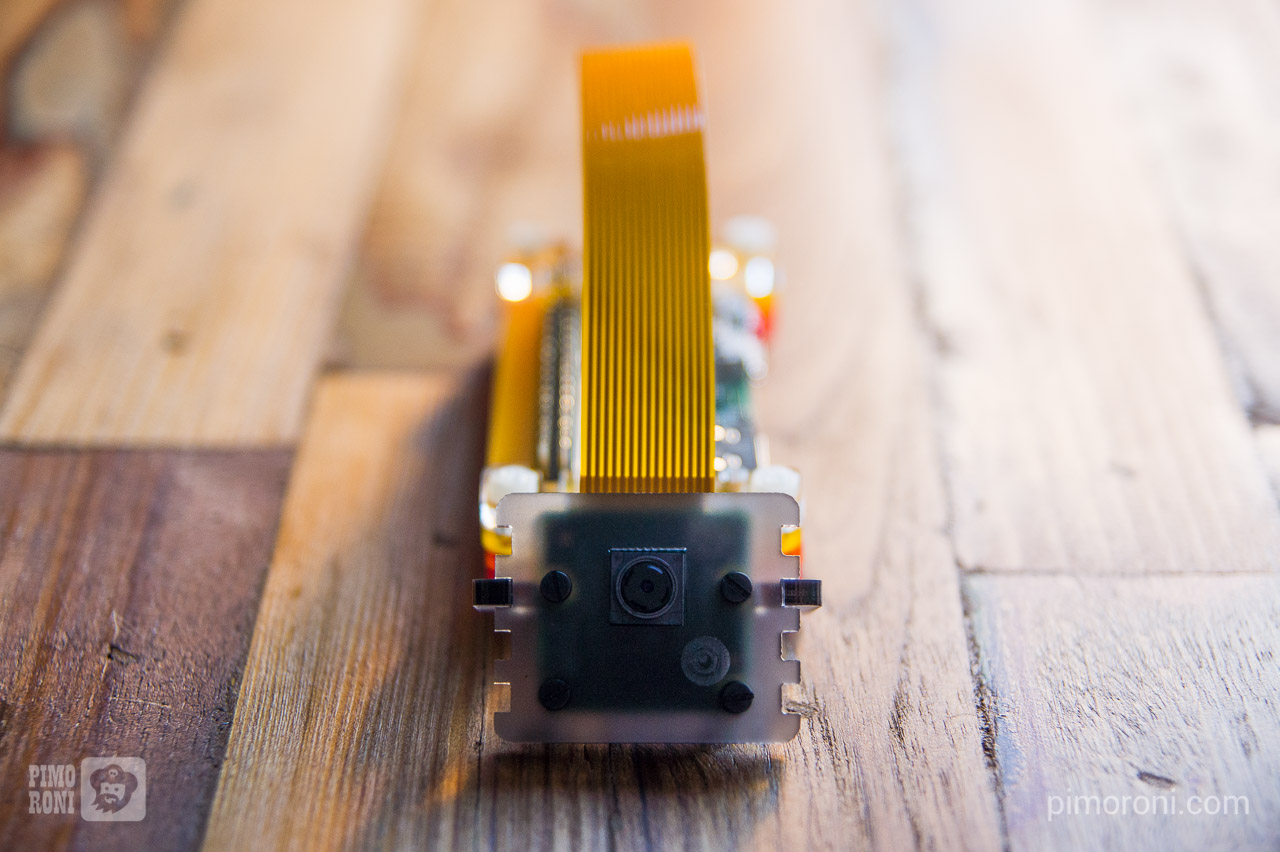 You'll need use the latest version of Raspbian to enable the camera to work with the new Zero, so be aware of this if you're having trouble getting your camera set up.

Because of the slight changes to the component placements on the new Zero, and the addition of the CSI connector, we've made a new version of our Pibow Zero in a new yellow/orange/red colour scheme - FLAME! 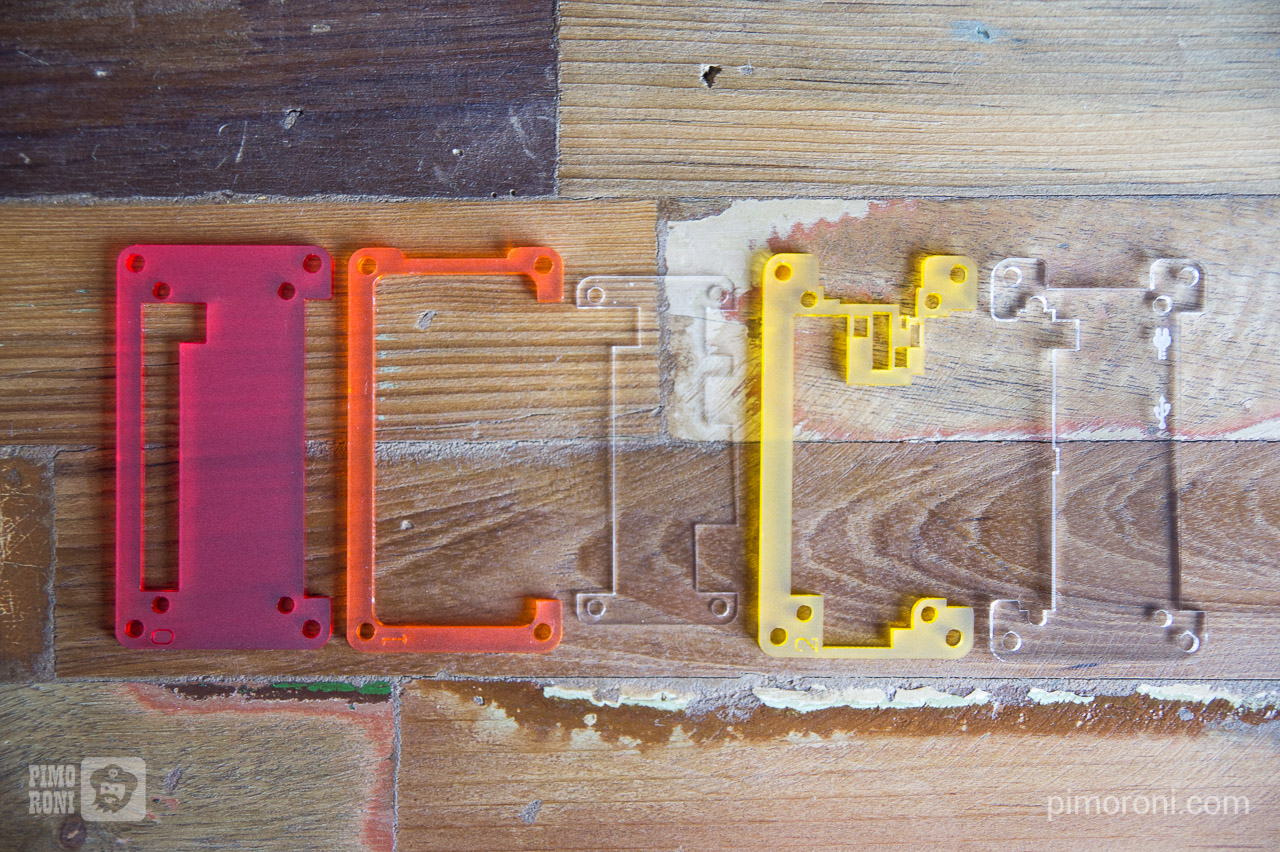 There are a few changes with this new Pibow Zero.

The first is that the bolts and nuts now attach through dedicated holes, like our larger Pibows, rather than through the Zero's mounting holes. This change means that you can now mount your Pibow Zero using the mounting holes in the Zero.

We've also used slightly longer bolts, so you can also use these to mount your Pi/Pibow, if you wish.

The second is the addition of a thin shim that sits underneath the zero and inside layer 1 of the Pibow. This makes everything fit a little more snugly and means that there isn't any pressure put on the clips of the CSI connector.

The last is that you can now access the camera connector while the Zero is in its Pibow. We've found that one of the iFixit spudgers is ideal to gently pry open the clips on the connector, but a pencil or paperclip would do the job equally well. 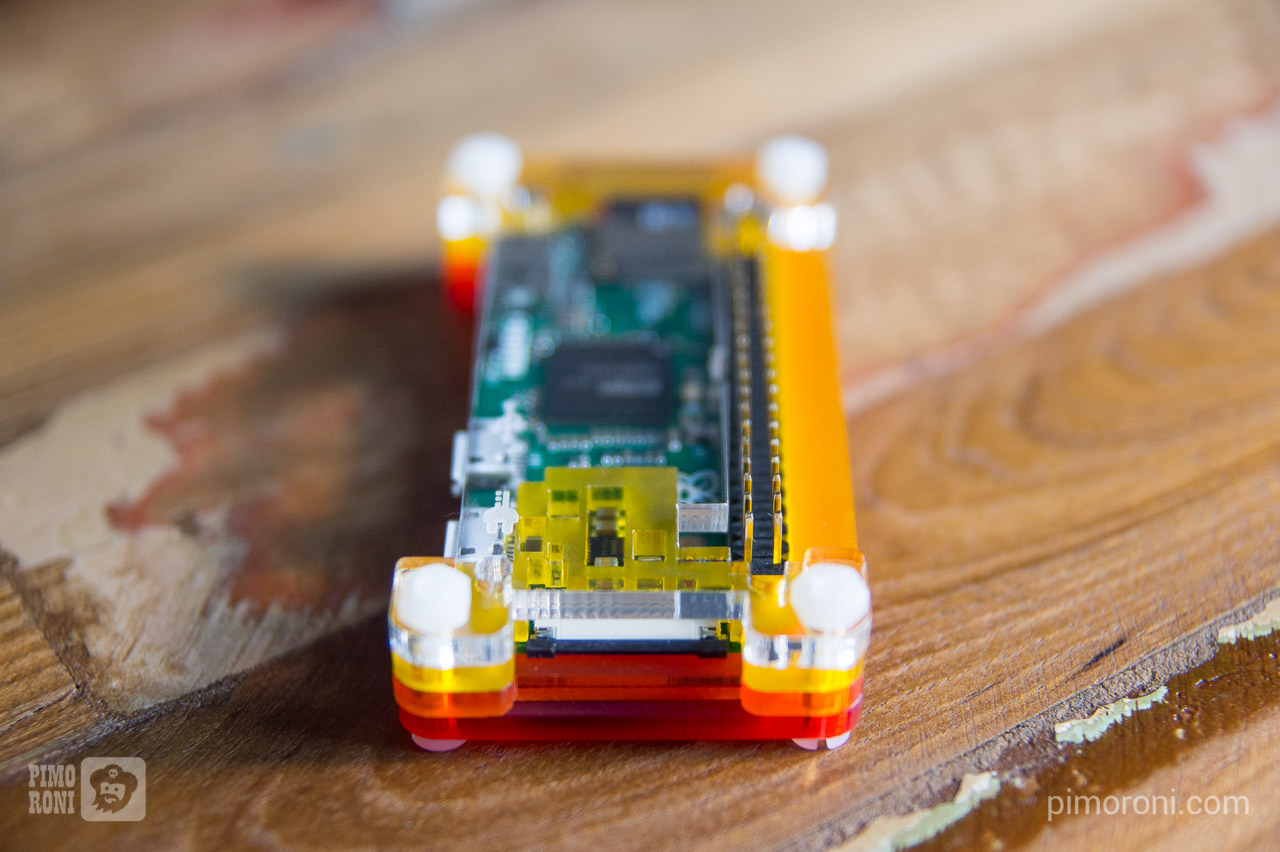 We have the new Zero available in the Pimoroni Shop today with the following options: