The Raspberry Pi 3 will replace the Pi 2 in the current lineup, landing at the same price point that the headline model has always occupied.

Here, we'll go through what's new in terms of appearance and specifications, and then go through some benchmarks comparing the new Raspberry Pi 3 to the Pi 2 and Pi Zero.

Outwardly, the changes in the Raspberry Pi 3 might seem modest but, as you'll see from the benchmarks later, it shows an impressive jump in performance over last year's model. 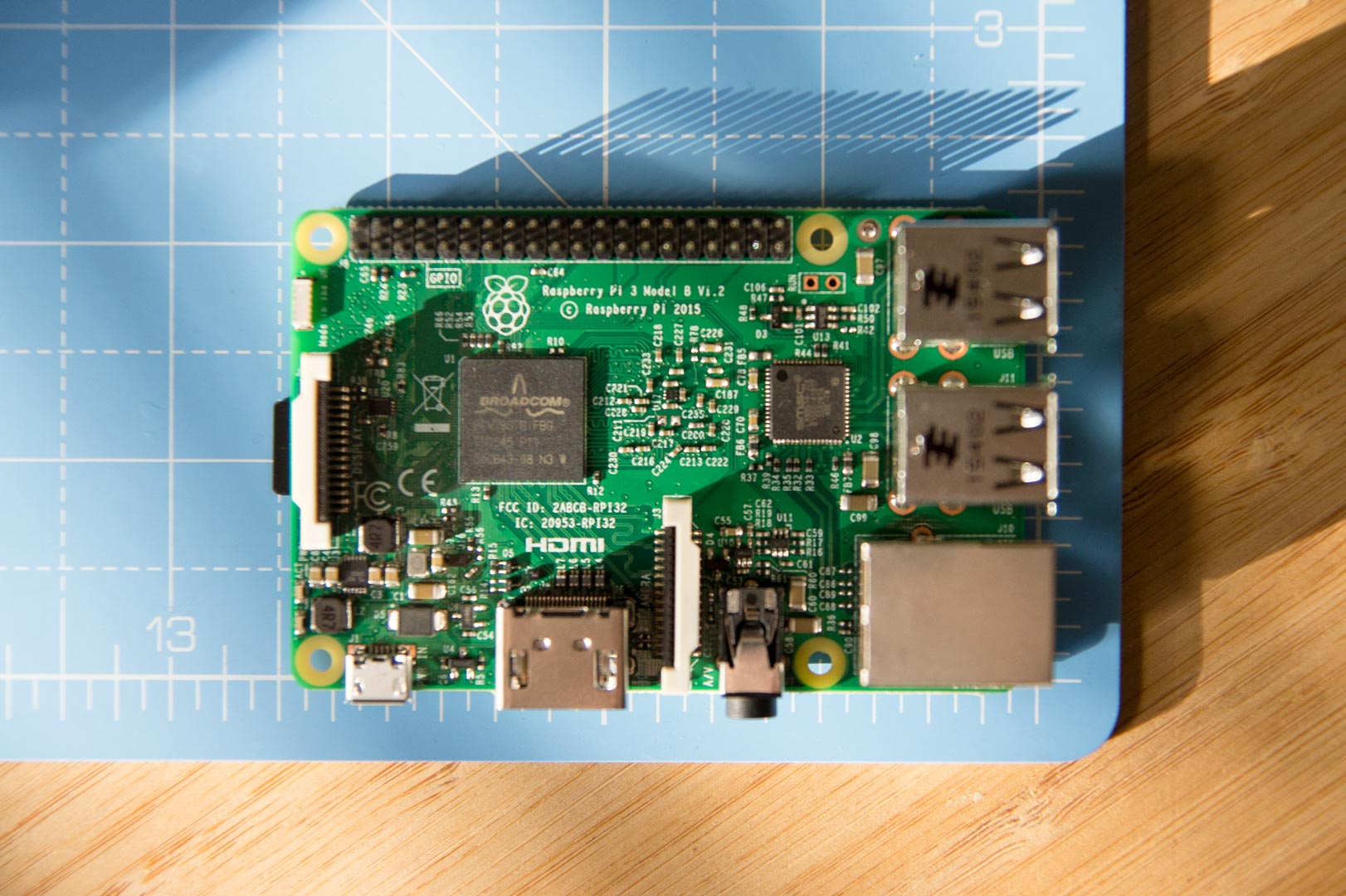 Video and 3D performance has also seen a bump with the VideoCore being clocked at 400MHz for video processing (up from 250MHz) and the 3D graphics processor running at 300MHz (up from 250MHz).

One of the most welcome changes will be the addition of onboard WiFi and Bluetooth. The WiFi is compatible with 2.4GHz 802.11 b/g/n networks and the Bluetooth 4.1 supports BLE (Bluetooth Low Energy) both are supplied by the BCM43438.

Elsewhere, everything is pretty much the same as the Pi 2. There's the 4 USB 2.0 ports, 10/100 ethernet, HDMI port, combined 3.5mm analog audio and composite video jack, CSI and DSI connectors for cameras and displays respectively, the microSD slot (which is now not spring-loaded), and the same 40 GPIO pins.

The combined WiFi/Bluetooth ceramic antenna package sits just above the DSI connector (the white rectangle) which means that the run header has moved across between the GPIO pins and the USB jacks like on the Pi Zero. The power and activity LEDs have also moved from top left to bottom left, again to accommodate the WiFi/Bluetooth, which may be a problem if your case uses light guides.

The Raspberry Pi logo has also moved from the left of the SoC to just above it. 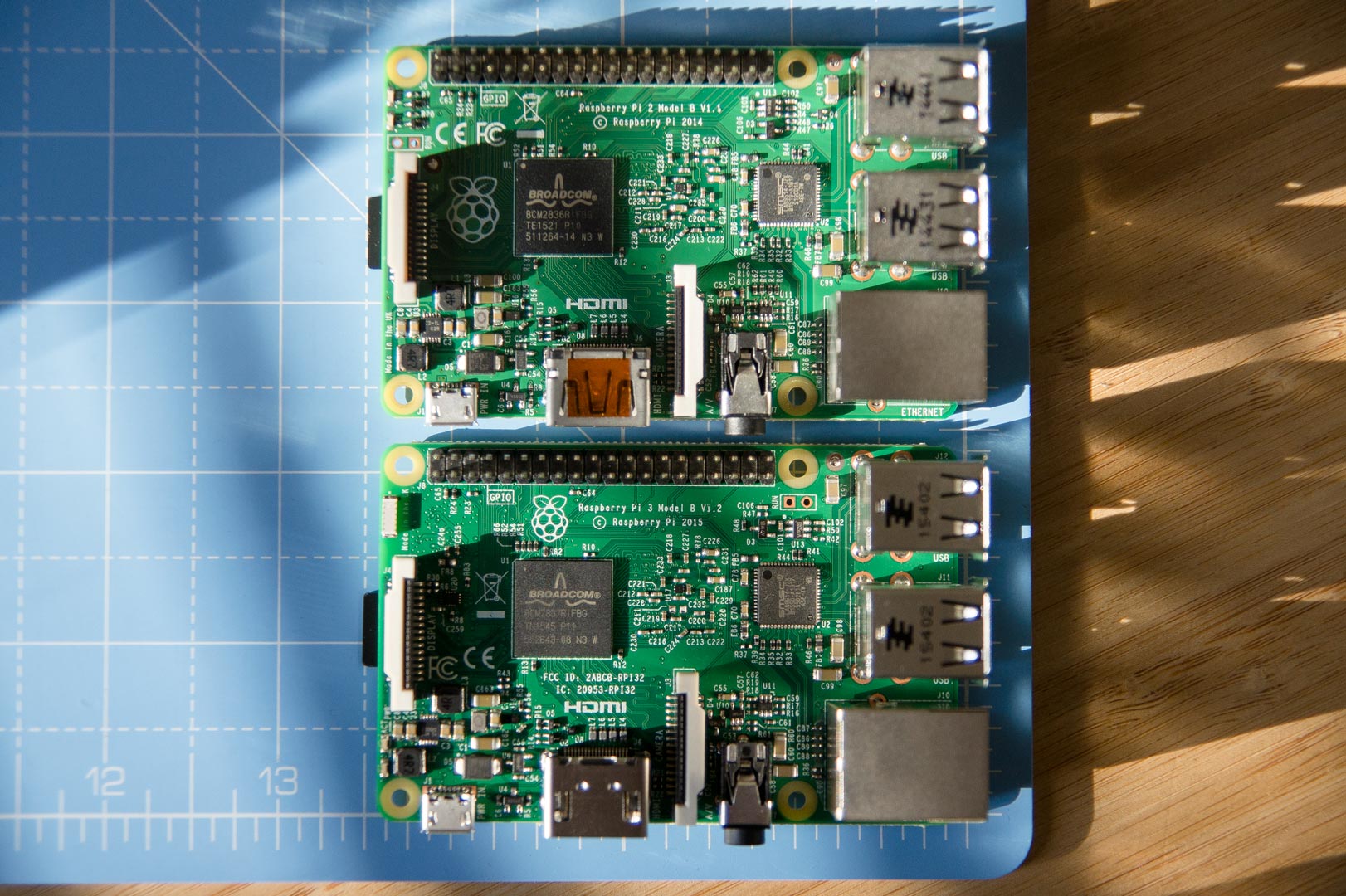 Because of the slight tweaks to the layout, we've designed a new Pibow 3 case for Raspberry Pi 3 coming in both Coupé and full-size versions.

All of the benchmarks below were carried out with just a USB keyboard and mouse connected with power supplied from the official Raspberry Pi Power Supply, with the exception of the WiFi dongle test in which the USB WiFi dongle was also connected. The Pis were naked, i.e. not in a Pibow, except for the onboard WiFi in Pibow test.

The very modest speed up is likely due to the fact that booting is heavily I/O bound so the extra processor grunt can't improve things much over the Raspberry Pi 2. 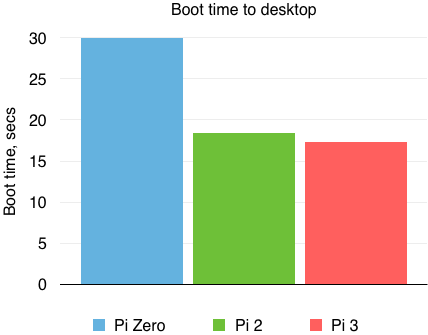 The CPU in the Raspberry Pi 3 is a quad-core 1.2GHz compared with the quad-core 900MHz of the Pi 2 and single-core 1GHz of the Pi Zero.

By the numbers, the Raspberry Pi 3 should represent a roughly 33% jump on the Pi 2 (allowing for clock speed alone) and completely blow away the Pi Zero.

The benchmark we used here was Sysbench, computing primes up to 20,000. This is a heavily CPU bound test and, as such, ideal for comparing the three SoCs without side-effects from the memory or GPU.

In two, three, and four-core setups the Raspberry Pi 3 consistently performs around 60% faster than the Pi 2. 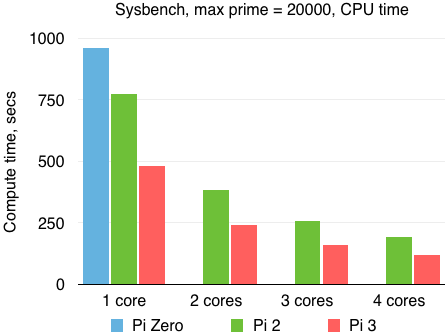 In terms of CPU temperature, the Raspberry Pi 3 runs significantly hotter than the Pi 2. We used the following to measure peak CPU temperature while primes were being computed. 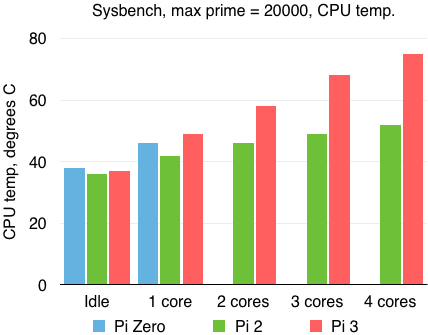 All three Pis idle at 36-38 degrees, and the Pi 3 gets up to a toasty 75 degrees while computing primes on four cores, compared with 52 degrees for the Pi 2 and 46 degrees on the Pi Zeros single core.

It's worth noting that these temperatures won't cause you any problems. The Raspberry Pi 3 will automatically throttle performance if the internal temperature of the SoC reaches around 82 degrees centigrade.

Current was measured with an inline USB current and voltage meter.

The built-in Wireless LAN and Bluetooth and the more powerful processor mean that the Raspberry Pi 3 draws about twice the current of its predecessor when under heavy CPU load (750mA vs 360mA).

This means it's more important than ever to have a good quality power supply for your Raspberry Pi. 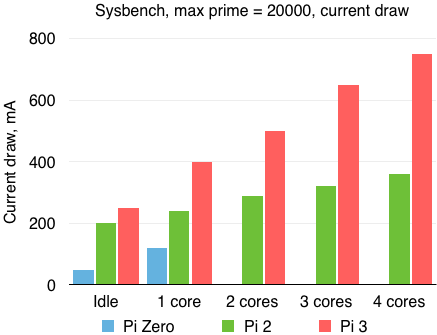 While we weren't able to benchmark the Bluetooth, as the drivers weren't available during our testing, we did some pretty extensive testing of the new onboard Wireless LAN, comparing it to the official Raspberry Pi USB WiFi dongle.

We tested performance at 2.4GHz with a TP-Link AC750 Archer C2 wireless router connected to a MacBook Air with a Thunderbolt to ethernet adapter. The router was placed as close as possible to the onboard WiFi and WiFi dongle. iPerf was used to do five 10 second transfer speed tests, with the following command.

The results show average transfer speeds of 39.34Mbit/sec for the onboard Wireless LAN, just slightly slower (~5%) than the Official Raspberry Pi WiFi Dongle.

Performance is not affected at all by having the Raspberry Pi 3 encased in a Pibow - phew! However if you use a metal case it could cause issues with reception. 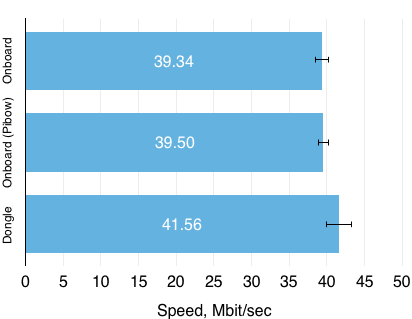 Memory speed was tested with Roy Longbottom's MemSpeed benchmark. The Pi 3 has the same 1GB of RAM as the Pi 2 and the Pi Zero has 512MB of RAM. It's hard to benchmark memory speed without seeing effects of CPU speed, so bear this in mind when looking at the following results. 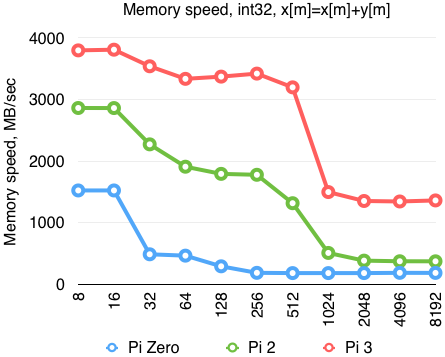 The Raspberry Pi 3 offers a really nice jump in performance from the Pi 2, which itself was the biggest leap we'd seen so far in the life of Pi.

The CPU performance is about 60% faster than the Pi 2. It's worth remembering that as software is optimised for the new processor it should be able to flex its 64-bit credentials more and increase the performance gap further. Memory speed seems improved, although these benchmarks no doubt also benefit from the boost in CPU performance.

The on-board Wireless LAN and Bluetooth will undoubtedly be the biggest talking point though and, from our testing, it shows very similar performance to the Official Raspberry Pi USB WiFi dongle, with transfer speeds of up to about 40Mbit/sec.

All in all, the Raspberry Pi 3 is a very worthy successor to the Pi 2. You should probably grab one!

We have them available in the Pimoroni Shop today with the following options: