Our range of audio boards

In the shop, we have three different pHATs (made by us) for Raspberry Pi audio - pHAT DAC, pHAT BEAT, and Speaker pHAT - that all have slightly different features. They all give you high-quality, digital, 24-bit, 192KHz audio, using the I2S interface on the Raspberry Pi (through the GPIO pins).

All three boards will work with any 40-pin version of the Raspberry Pi, including the new Pi 3 B+ and the Pi Zero W. They're really handy for the Pi Zero W though, since it doesn't have a built-in 3.5mm stereo jack.

This quick blog post will go through what they all are, and what they're good for, and link to some tutorials on how to use them. 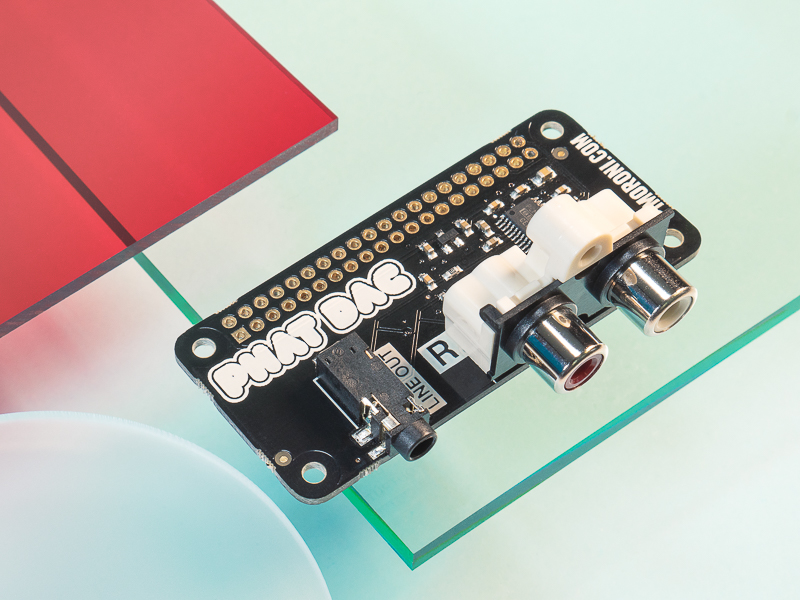 pHAT DAC gives you un-amplified, line-level, digital stereo audio. It's the simplest of our audio boards to set up and use, as it just has audio outputs on it, so you can just install the software, plug in a cable, and away you go!

There is a 3.5mm stereo jack, and if you buy an additional dual phono connector then you can use a dual phono-dual phono cable to hook it up to a hi-fi amp.

If you have an old speaker or radio with a 3.5mm stereo input that you'd like to soup up, then this is the board to get. It's also ideal for upgrading old hi-fi equipment. With the phono connector, you can connect it straight up to an amp. and stereo speakers and add some new functionality.

To set pHAT DAC up (read the full tutorial here), install Raspbian on your Pi, open a terminal, and type:

pHAT DAC should work just great with dedicated audio operating systems like Volumio or Rune Audio, and generally you can pick "HiFiBerry" as the output and it'll work just hunky dory with pHAT DAC, without even having to run our installer!

Both Volumio and Rune Audio will let you play local audio files (MP3, FLAC, etc.), stream files from another network source like a NAS, play web radio, or stream music over AirPlay from an Apple device. Or you could try one of our dedicated setups for AirPlay or Spotify streaming.

We use a pHAT DAC here in the Pimoroni Creative office to run a Slack-controlled Spotify box using the CrispyFi software, and it works just great! 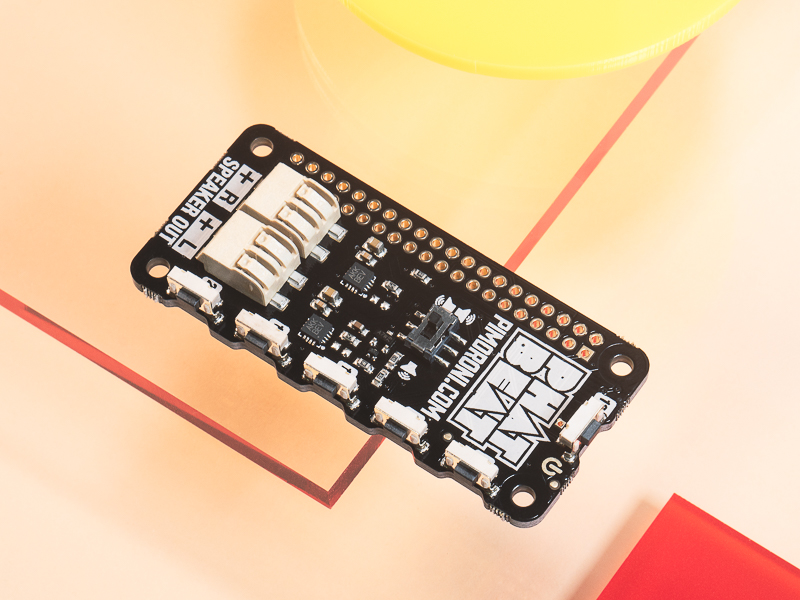 pHAT BEAT has amplified digital stereo audio, VU meter LEDs, and six hardware buttons. It has many more features than pHAT DAC and is the audio board to choose if you're a hacker or maker and want to build your own Pi-powered stereo!

It's the board we include in our Pirate Radio kit for Pi Zero W, in fact we designed pHAT BEAT especially for the Pirate Radio!

pHAT BEAT has two push-fit speaker terminals to connect your own speaker/s to. The on-board amps can drive two speakers of up to 3W each. There's six buttons to use as you wish. The two rows of eight LEDs are perfect for displaying a VU meter (that shows the "loudness" of your audio). There's also a little DIP switch to change between mono (mixed-down stereo) and stereo audio.

pHAT BEAT is ideal for building your own speaker or internet radio. Want to revamp a beautiful vintage radio with streaming capabilities? You could even stick it right inside a bookshelf-style speaker, since it's so small. Or perhaps you want to make your own speaker enclosure (from an old cigar box?) and add a speaker or two yourself?

Again, we have a one-line installer to get pHAT BEAT all set up (read the full tutorial here). Once you've installed Raspbian on your Pi, open a terminal, and type:

Our installer also installs a plugin that displays the volume on the VU meter LEDs whenever it receives any sound.

We've got three different streaming setups that you can try with pHAT BEAT - to stream internet radio, to stream music over AirPlay, and to stream Spotify - or you can hack at our code and do something completely custom!

The speakers just plug right into the push-fit terminals, although it helps if you tin the tips of the wires with a little solder first!

(Amplified digital stereo audio with a tiny speaker onboard) 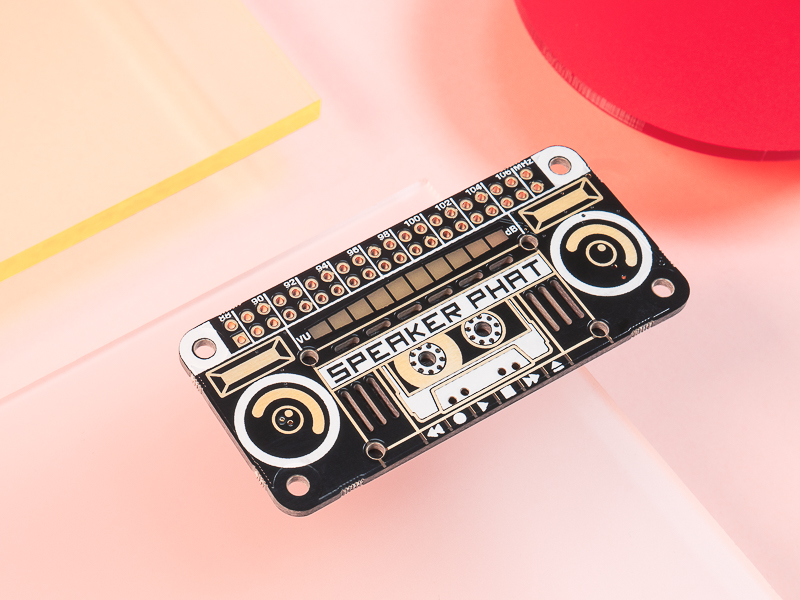 Speaker pHAT uses the same combined DAC and amplifier chip as pHAT BEAT, although it just has one of them, meaning it's only mono audio. It has 10 white VU meter LEDs, and a tiny speaker that fits on the back for built-in audio.

The speaker that's included is louder than you'd expect for its size, although its not loud enough or high enough quality for serious uses. However, because it's a solder-yourself project you can wire a punchier speaker to it quite easily.

Because it's so small, it's ideal for fun little projects. Turn it into a tiny mixtape, then send it to someone; when they plug it in, it'll start playing their favourite songs. It also works really well as a small speaker to go with Piano HAT or Drum HAT.

You'll need to follow our guide on how to solder Speaker pHAT first. Then, on your Pi with Raspbian installed, open a terminal and type:

Like pHAT BEAT, that'll re-route the audio correctly through Speaker pHAT and install a plugin to display volume level on the VU meter LEDs.

The AirPlay project will work just great with Speaker pHAT too. As well as the mixtape tutorial mentioned above, there's also a really cool project to [build an itty-bitty beat box] with Speaker pHAT and Piano and Drum HAT. We also used one to upgrade a lovely old Roberts R600 radio to an internet-enabled radio!

We also have a great range of IQAudio HATs for Raspberry Pi that cover all the bases and have some extra bells and whistles like optical audio out and headphone amps.

If you're using Arduino, or if you want to add an amplifier to something like pHAT DAC yourself, we have a great range of audio breakouts from Adafruit and others. And, of course, we have a range of different speakers of various shapes and sizes!

We hope this has been useful, and if you have any more questions then pop a post in our forums at https://forums.pimoroni.com.